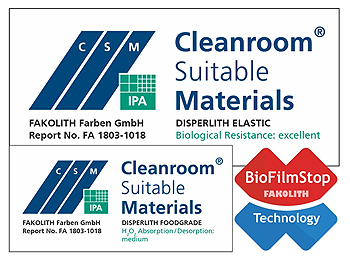 Foodgrade and Hygienic paints from Fakolith are already used frequently in clean rooms for a long time.

Now the paints Disperlith FoodGrade and Disperlith Elastic, have too the tests and certifications carried out by the Fraunhofer Institute in Germany in accordance with the ISO 846 and VDI 2083 standards:


Do you want to know who we are in 2 minutes? Watch this video


· On the one hand, its adequate resistance to disinfection with H2O2 has been approved. Hydrogen peroxide is widely used as an effective disinfectant in Clean Rooms, but it is a very corrosive chemical agent for many surfaces.

· On the other hand, the antimicrobial efficacy against fungi and bacteria of the Fakolith Foodgrade and Hygienic paints, was already known thanks to BioFilmStop technology. Now our paints have been also tested according to the specific norm for this environment (against; Aspergillus niger, Penecillium funicolosum, Paecylomyces variotii, Gliocladium virens, Chaetonium Globosum, Pseudomonas aeruginosa), resulting a protection classified as EXCELLENT.